Climbing Out of a Funk

Been feeling kind of blah lately.  Not sure why.  Maybe it's the heat.  The wife says it might be because the garden is done.  Either way I have to snap out of it.  It's a drag.  No patience with the kiddos, no patience at work and I find myself just being a general grump lately.  That ain't me.  The peeps around me deserve better.

I started running again.  Before son #2 was born, I was a regular runner, nearly every morning.  Once he came along I got out of the habit.  A baby will do that to a household.  He's 2 1/2 now though.  I don't have an excuse, except that I was just being a useless slob.  My short term goal is to run/walk every morning.  Even weekends, even rainy days.  I remember feeling so good when I was doing that a few years ago.  It gave me more stamina through the day.  It helped clear my sinuses.  If kept me from packing on 20 extra lbs.  Remind me again...... why did I stop?  #FoRealDough

Garden is done, but we're still planting!  I found some blackberry and blueberry bushes on a clearance rack at Lowes.  $3 each.  They actually looked pretty healthy too.  We planted two of each and have our fingers crossed that we can keep them watered enough through the brutal South GA summer.  We also planted 5 peach trees.  These gems were volunteers that my Dad dug up out of his trash pile.  He and Mom put up some peaches last year and low and behold the pits put on some pretty impressive trees right there in the trash pile.  Nature is funny like that.  We potted them in the spring and they had began to get root bound, so it was time to get them in the dirt.

I'd like to go camping with the oldest boy, but finding the time and fighting the heat/rain is making that difficult.  I'd love to go to the river, but it's so low I'd be dragging the boat........ not to mention I'm not sure it's clean after a questionable fish kill.  Guess I need to treat it like the running.  I just need to step up and do it!  In other news, I'm thinking about taking up photography.  Auctioneering school is still on the bucket list, but taking awesome pictures seems to be a little more realistic goal right now.

Exercise and outdoor activities.........that will bring a man out of a funk don't you think?

Feeling Better About the World 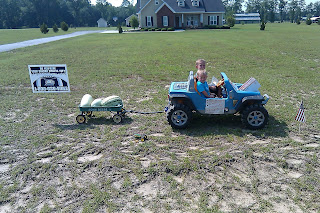 After 10 days of not wearing shoes, napping and generally going at whatever pace I wanted................. it's back to work today.  Our family enjoyed a week at the beach and with the way the 4th of July fell this year, we had a good three days to get home, unpack and get some stuff done at the Ponderosa too.  that was a welcomed treat.  Coming home from vacation, unpacking that night and going to work the next morning is a huge drag.

We vacationed with the wife's family to a small and relatively underdeveloped South Carolina barrier island called Edisto Island.  Neat place with a lot of history, one grocery store, one gas station a hand-full of restaurants and shops and 4 million rental houses.  Very family oriented.  I'm not a big fan of the beach really.  I prefer fresh water adventures.  The wife and kids enjoy it though, so it's worth every penny.  We did rent a house with a pool this year.  Also......worth every penny!

As I typically do each year, I took a 2 day vacation from the vacation and came home to take care of some chores.  This time it was cutting grass.  If you've read any of my garden updates this year you would know that we were very dry this spring.  I pretty much called it quits on the garden just before we left for vacation.  Well, we have received as much rain in the last week as we did in the previous five months.  In fact Wednesday afternoon we got right at 4 inches.  Insane.  Garden is over but the grass is looking great!  Maybe this will give the pine seedlings the chance to get down a good root entering their 3rd year.

So the title of the blog......  I did come across a few things during my vacation that has me feeling better about the world.  Sometimes I watch the news, read certain publications and I just get down in the dumps.  There is hope though.  Here are a three reasons why:

1.  My kids set up a watermelon stand this weekend.  Through no prodding by me, my oldest said that he wanted to set up a watermelon stand and sell them for $1 each.  Great teaching opportunity I thought.  We have already established that "you get money by working."  This was a chance to teach that you can also get money by selling something that you "created."  Under the direction of the oldest, the boys did everything themselves.  The planned how they would set up, made a sign and even decorated.  After some help from Daddy in getting loaded and some stern words about staying out of the road, they were off.  Not a lot of traffic in our area, LOL.  They were troopers though.  Stayed with it for a good while.  We finally had a generous visitor who bought the only 4 watermelons we had left.  The kiddos were fired up to have money in their pockets.  A trip to the store will soon follow.  Why it makes me feel better about the world - I seem to be making some headway in showing the boys that you have to work to get paid.

2.  Cars 2 is in theaters now.  Cars is one of my all-time favorite movies.......animated or not.  Pixar does a good job of making kids movies that the parents can actually enjoy as well.  For those of you who do not have kids.............. that's a big deal!  Naturally I was excited to see the sequel.  This would be the oldest son's first trip to a movie theater too.  The theater we chose was really nice.  Very clean, modern amenities and free popcorn!  Maybe that's customary now.  I have no idea since I've not been to a movie is 5 years or more.  It was a small popcorn, but still roughly the size of a gallon tea pitcher.  Of course the one pack of  M&Ms and two bottled waters were $10.50.  Glad to see some things haven't changed.  Davis really enjoyed it and even kept quiet.  That was a shocker.  Despite being a social commentary on alternative energy, the movie was great.  I enjoyed it for what it was.  It was a movie about talking cars that had races all over the world and a redneck tow truck has some interesting adventures along the way.  What's not to love about that plot?!?!  Why it makes me feel better about the world - Even with the social commentary about "big oil" and alternative energy, the movie still had room to provide a plot about friendship, cooperation and respecting others.  Good reminders for children and adults alike.

3.  My garden wasn't the only one that sucked this year.  They say misery loves company.  I guess that's the case here.  In talking with others from my area, Wilt Virus was very bad on tomatoes all over the region.  The lack of rain was universally troublesome.  Some folks burnt up, others drowned.  It was neat to read and converse with other gardeners across the country this year.  Maybe a few of our ideas can translate the some of our starkly different climates.  We got food in the freezer and on the shelf.  I should absolutely not complain.  Why it makes me feel better about the world - I'm not the only one........ and there are countless resources from which I can learn.

Writers block is starting to set in once again.  I do have a few drafts in the hopper, so I'll be good for a while.  However, the garden updates have really kept me writing regularly.  Honestly though, writing solely on that was starting to get a little boring to me.  Glad to have a little break from it.  Suggestions for topics?  I'd appreciate them.