Good boogly moogly it's dry!  I haven't had any rain at my place in almost a month (27th of March.)  I have watched several systems go right around my place.  On Good Friday it flooded 10 miles up the road from me, but I didn't get anything but 85 degree wind.  That's not all that great for the garden.

However, it is fairing pretty well  After experimenting with a variety of different sprinklers over the years I have a really good system this year.  I've used oscillating sprinklers, impact sprinklers, soaker hoses and the like.  The oscillating sprinklers didn't hold up to the dirt and would last a month before the gears stripped out.  The impact sprinklers didn't wet the ground within a 5' diameter of the center.  The soaker hoses did okay, but caused a mysterious root rot on the tomatoes one year.  This year I decided to try a couple of Gilmour's low pressure turbine sprinklers.  These puppies are great so far!  I did take them off of the low bases on which they came.  I had a couple of aluminum tripods left over from previous sprinklers.  They screwed right on and worked perfectly.  The settings are nice for getting an even watering.  There is still a bit of a miss in the center like with an impact sprinkler, but the area is only about 1' instead of the 5' that I was battling.  So far they look good, but they have yet to encounter an entire gardening season......or a South GA thunderstorm .......or the baking 100+ degree temps of summer.  We'll see how they fare.

Everything is up and coming in very well.  We could potentially be picking snapbeans and digging some small potatoes in a few weeks. (we're down to the last quart of beans from last year.  We nailed it!)  The corn is looking good after the replant. Since my last garden update we set 72 tomato plants and 30 or so sweet potato plants.  They're looking good so far, but the lack of rain has me really worried about the tomatoes.  Everything else is plugging right along: watermelons, squash, peppers, cucumbers.  Even the sugar cane is us to almost a second joint.

Still no sign of Bambi yet this year.  The super duper electric fence is still chirping right along...ready for the moment that the sweet watermelon foliage finally entices him/her to take a chance.  I haven't even seen any tracks on the perimeter.  I know it's only a matter of time.  They have found the tender foliage of my apple trees though.  If it isn't one thing it's another.

If it could only get a nice inch or two of rain.  The place would really take off like gangbusters.  But then again.....so would the weeds.  When God provides, he provides for all!  There is a decent chance Thursday.  I better go sharpen the hoe ;)

Y'all take it easy. 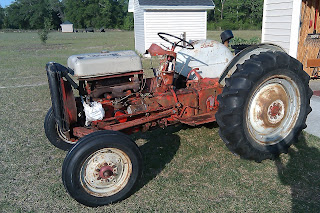 This is the second in a three-part series where I attempt to "blogify" the process of refurbishing an old tractor.  If you missed part one, check it out here.  I want to take a moment to thank my friend Wallace for suggesting this blog topic.  I was  having a bout of writers block and this series has been excellent for getting me back on track.  Thanks Wallace!

At this point we are starting to give the old Ford a good cleaning in preparation for painting.  I did want to quickly touch on the problem we had with the throttle linkage.  When we rebuilt the carburetor we put everything back together just like it came off.  We thought it looked odd that the linkages from the throttle to the carb were all bent up and binding.  Having never restored a Ford, we put it back like it came apart.  When we cranked it the throttle would not work properly. The tractor ran fine and the carb worked fine but the throttle linkages kept hanging up and binding.  After a few hours of racking our brains my Dad encouraged me to let it go.  He said that, "sometimes it's better to step away and come back another day."  Good advice, so that's just what we did.  We came back a little over 24 hours later and looked at it again.  That's when we solved the mystery.  Whoever rebuilt the carburetor last put the throttle body in backwards.  Instead of fixing it they bent the throttle linkages to get it to work.  I swear........ I don't know how this thing is even still running!

Once we got that buttoned up and had the mechanics all proper, we hit it with the degreaser and pressure washer again.  Then the fun part..... cleaning the cracks and crevices.  There isn't an easy way to do this.  It's all about getting dirty and getting it done.  Preferred tools for this part of the process are things like wire brushes, paint scrapers, putty knives and screwdrivers.  One of the best tools for getting into tight places is a can of engine starting fluid also known as ether.  The little straw on the tip and the pressurized can are a really big help in some of those hard to get places.

After the fine cleaning it was one more blast with the pressure washer to rinse away the loose dust, goop and gack.  Here she sits ready for some mild body work and a coat of primer.  That will be part three.

Babbling 'bout a Birthday and a Blogiversary

What a great birthday!  I was woken early in the morning by two little fellas presenting me with gifts.  The bigger box was a cool battery powered sweeper for our hard floors.  That was great but the homemade card, homemade book and pinchpot (apparently some kind of primitive pottery) were the best gifts of all!  Handmade gifts from the kids.  I cannot imagine that I will ever receive as special a gift as that!

As the day went on I enjoyed best wishes from my coworkers and friends.  And Facebook....... holy moly Facebook!  If you ever have a complex, just change your birthday on Facebook and you will be showered with comments beyond your wildest dreams!  I made it a point to personally comment on each birthday wish instead of doing the mass status update.  Folks took time for me.  I feel it fitting to take time for them too.  Even if it's just a few strokes of the keypad.  Superstar for a day!  Made me feel special!  LOL!

The afternoon was brightened as one of my coworkers and I got into a conversation about Jerry Clower.  What a genius he was.  It got me fired up so I hit up a few classics on the way home.  I always cackle no matter how many times I hear him.  Shoot up in here amongst us!  One of us has got to have some relief!

When I got home my mom, dad, brother and his GF came over to enjoy dinner and an ice cream cake with us.  I enjoyed having them over.  The boys enjoyed a crowd at the house too.  They got to show off a little bit ;)

In the middle of the birthday frivolity I remembered that it's been right at a year since I started "Back 'er Down."  I mentioned in my very first post that this is a blog that I would truly enjoy even if it wasn't read by a single person.  That turned out to be true!  I think it's helped keep me grounded, focused and honest.  Looking back I've found that I have had some successes and that I still have some work to do in other areas.  Thanks to the magic of Facebook, some other bloggers, a few fellow Kurt Busch fans and a lot of friends I actually have a good little following for this parcel of the Blogosphere too!  That's a nice added bonus.  Y'all keep reading and help keep me straight.  Okay?

Being a Renaissance Man 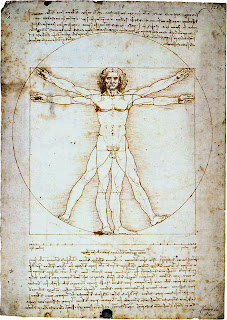 I enjoy doing a lot of things and I honestly believe that it will benefit me and my family in the long run.  I think that a lot of people these days are only equipped with one or two skills.  We go to college and "major" in one thing.  We learn a trade and focus entirely on that trade.  What happens if that major or trade goes away?  It's happening all around us.

I read that the economy is rebounding and that the "recession" is over.  I just have a hard time believing it.  I still see people without jobs.  I still see the prices of consumer goods soaring.  There are jobs out there though.  I see them every day.  Do people just not want them or are they not qualified to perform the task?  I don't really have the answer, but I suspect that it's a little bit of both.  I'm a trained PR man.  I got a quality education and learned all about crafting messages, channeling information and managing perception.  What if that was all I had?  Scares the hell out of me sometimes.  I work hard.  I love what I do, and I think I'm pretty good at it.  However, I am employed at the will of a state government entity that is suffering major economic setbacks.  I need something else to go with that.  Not only knowledge that makes me a commodity, but knowledge that edifies me personally.  I'm not talking about a masters degree either.  I'm talking about skills.  I've learned a lot of random things, but I have a hunger for more.  I want to learn how to deliver a breeched calf.  How to stitch up a wound.  How to code a cool Web site.  How to read a topographical map.  How to take a professional looking picture.  And by God I still want to go to Auctioneering School too!

At the risk of sounding a like a kooky apocalyptic naysayer, I think we seem to be losing that desire to learn and take care of ourselves in society today.  That scares the hell out of me.  I suppose that I'm not really an expert at anything that I do, but I do most of it pretty good.  I'm convinced that a strong back and a will to work is the most valuable skill of all.  It's hard to get myself motivated to do any of the things I mentioned.  They're all hard and they don't pay worth a damn.  I don't know if it's God or if it's my environment, but something keeps telling me that I need to continue diversifying my skills portfolio.  Learn as much as I can.  As kooky or apocalyptic as it sounds, that's what I'm gonna do.