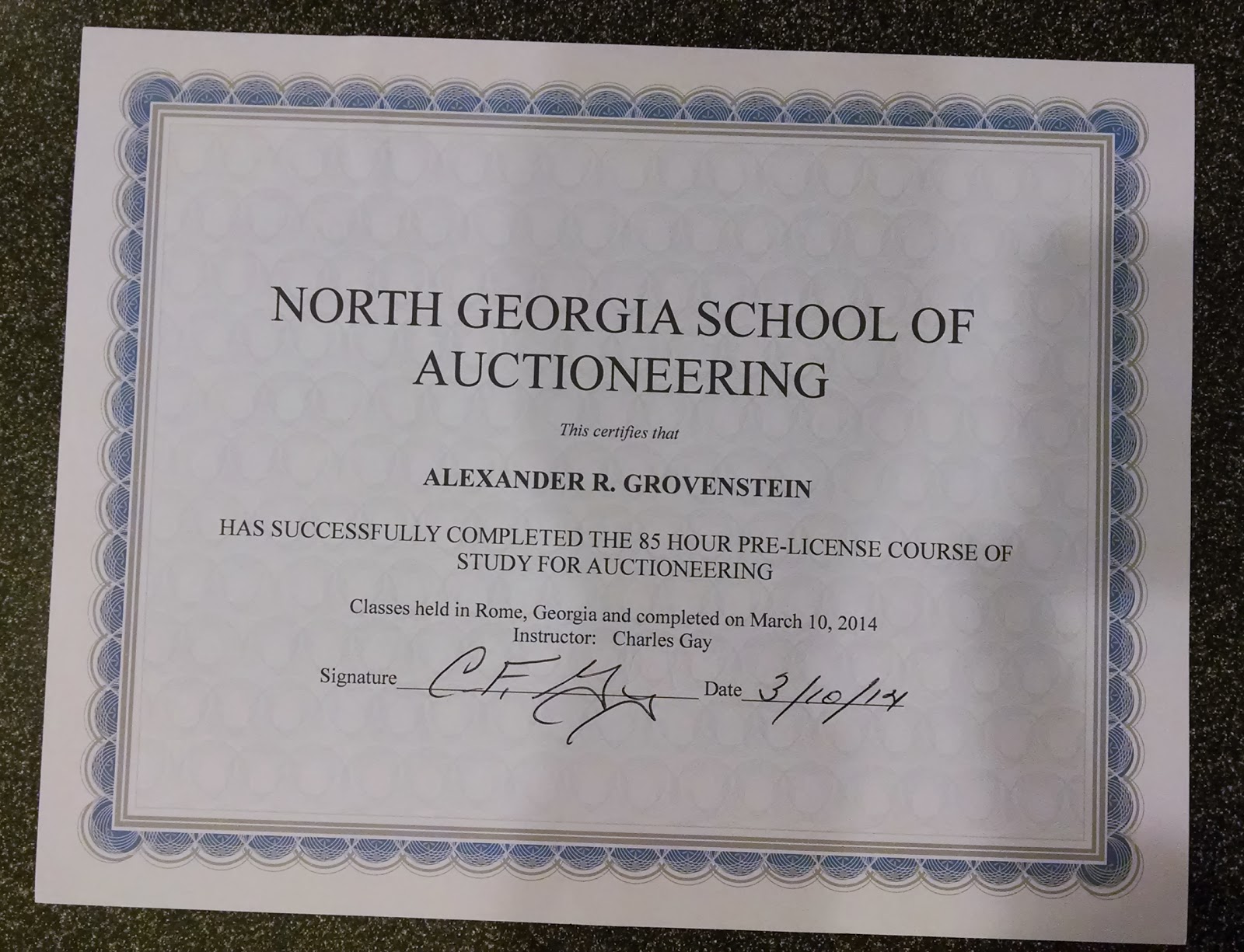 I did it.  I completed auctioneer school, I camped for 10 nights straight along the beautiful Coosa River, and The Excellent Adventure has come to a close. (If you missed any of it , you can read all 11 entries here.)  Wait a minute Alex..... Didn't you say you were going to camp for 11 nights?  I did say that.  However, our field trips and the days on which we stayed late banked us some hours.  We took our final exams this morning and at 1:00, we had completed our required 85 hours of pre-licensing education.  I did what any normal guy who hasn't seen his family in 11 days would do........ I broke camp, loaded up and headed home!  I auctioned every overpass between Rome and Bulloch County too ;-)  Instead of going home and taking a much needed nap on a real bed, I drove straight to the baseball field and met my family for my oldest son's first practice of the spring.  Totally worth it.

I had no problems with the final exam.  I made a 93, but I was peeved at myself for not making 100.  I knew the material, but the wording on some questions tricked me.  On two of them I just flat misread them.  Oh well, lesson learned.  We reviewed the test and I know where I faulted.  I feel confident that Charlie and Robin have prepared us to ace the state licensing exam.  The only thing left to do now is to file my application paperwork and wait to hear when I will travel to Macon to take the test.  A couple of weeks after that I should have my license in hand I will then officially be an auctioneer!

Then the hard work really begins.  It actually begins tomorrow.  I am back home, without a "real" job and hoping to develop three start-up businesses at the same time.  Welcome to the big-time young man.  Would I really do it any other way?  Gotta keep things interesting you know.  That might end up being a more excellent adventure than the one I completed today.......

Had some neighbors at the campgrounds last night!  They enjoyed a little one-night camping trip here on the Coosa River.  Rookies ;-)  To be neighborly, I practiced my chant quietly and without a lot of pomp and circumstance. 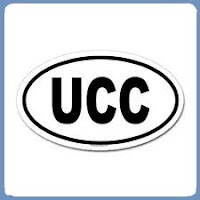 Today we chatted about Uniform Commercial Code and IRS form 8300.  Form 8300 says you must report, to the IRS, any cash transaction over $10k within 15 days of the transaction.  Do I like it?  Not really.  Will I do it?  Since it carries a minimum fine of $25k for ignoring it, I absolutely will!!  Aside from that, it was a typical day and we reviewed as we get ready for tomorrow's final exam.

I told you about our teachers, Charlie and Robin, in a previous entry.  With little to write about, I thought I would share some tidbits about my classmates.  We had a diverse group.

First we have Terry from Alabama.  Terry is pretty much a professional auctioneer, but he got nabbed for not being licesened.  No prob.  He came to school and he's taking care of business.  He was a valuable resource for us, especially hearing him chant.

Christy is from Mississippi.  She and her husband own an auction, but they're leasing it to another auctioneer right now.  They want to get into the business.  She will do great once she passes the Mississippi exam.  It is said to be the toughest test of all, but I feel certain she will ace it.

Ken is also from Alabama.  He served our country for 20 years and is looking for a new gig.  He is currently buying and selling and tinkering.  A man after my own heart!  He wants in on the auction side too.  He will get in and he will do great!

Fred is from Tennessee.  He has the hardest road.  Tennessee is the most stringent state in the union when it comes to auctioneers.  Before he can even get started he will have to serve a two-year apprenticeship.  The good news is that he has a sponsor in place and will be ready to roll once he passes his test.

Mike is also from Tennessee.  He joined us only for the last four days as he was there to secure a Gallery License.  That's unique for his state.  Mike is the GM for a very large auto auction company in Memphis.  He's not going to be an auctioneer, only at school to stay legal in Tennessee.

Missy and Pat are a team from Carrolton, GA.  They are both originally from Wisconsin.  Pat is still there and will join Missy in Carrolton as they develop an online auction.  Missy mentioned that her eyes have been opened to new possibilities over the last 10 days.  Pat is eager to escape the snow!

Daniel is from Claxton, right up the road from me.  I was glad to see someone from close to home.  I suspect that we'll try to help each other as much as we can.  Daniel did something remarkable in Cedartown.  As each of us went up to the stand, he bought something.  Then he let us keep something as a momento of the first time we sold something at auction.  People like that don't grow on trees folks.

Finally there is Phil from Valdosta, GA.  What a great guy.  Phil is in his late 50s. He has done a little bit of everything from teaching history to selling insurance and real estate.  He wanted to do something new to occupy his time.  You see....Phil's wife passed away and he buried her only two weeks before we started school.  I cannot imagine his emotions, but he controls them well.  I'm not sure I could do the same.  He was my biggest inspiration in the class.

I'm proud to know each one of those folks.  I hope that we'll all be able to serve as resources for each other.  Our teachers said that most classes end up working together on things.  I sure hope that is the case with us too. 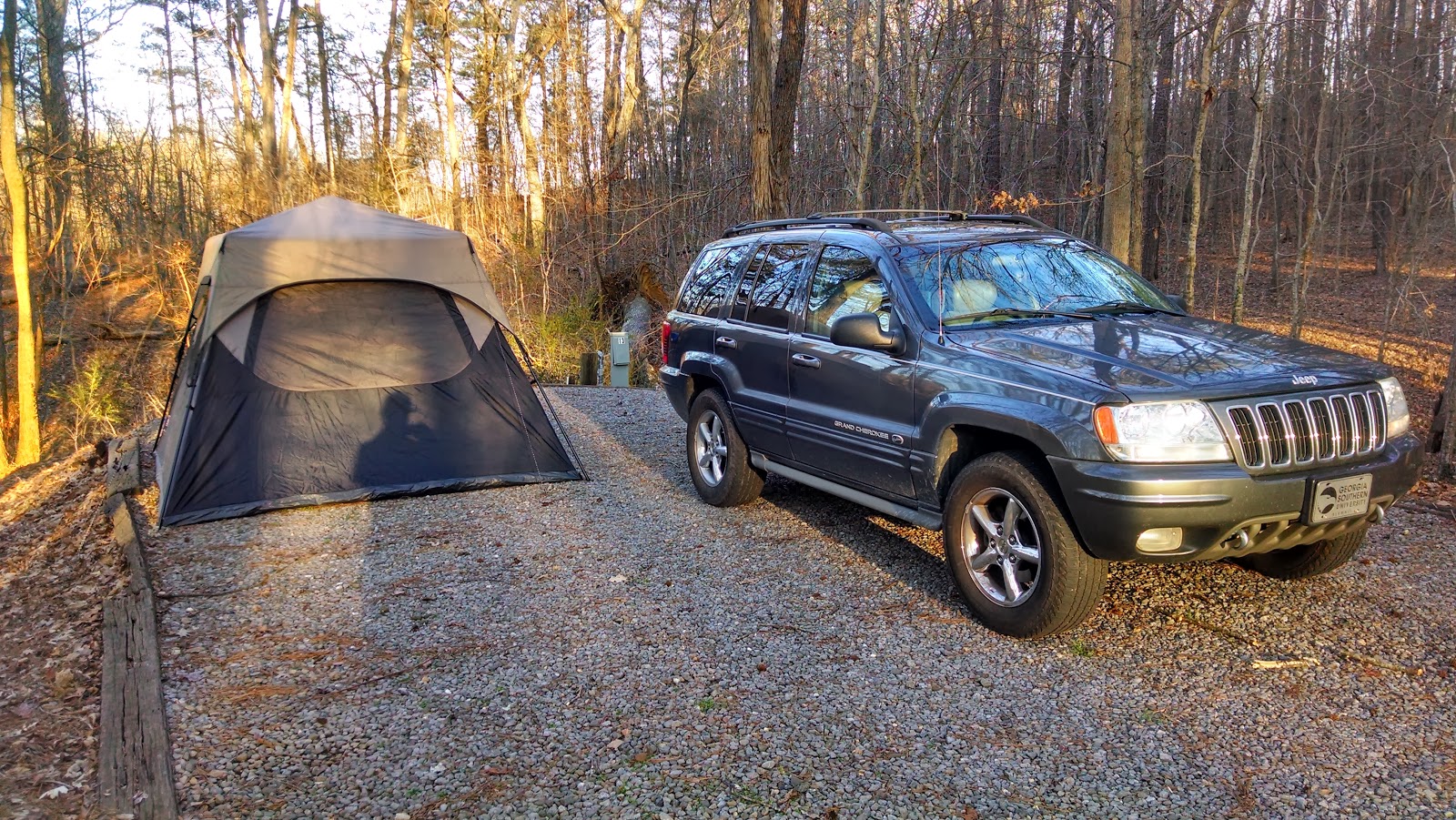 The weather is nice.  The 10 day school is winding down, but the content and anticipation are winding up!

After a few days dodging weather and sleeping in the Jeep, I was back in the tent last night.  The low was right around 40 last night.  It was indeed cold, but at least it wasn't raining or in the 20s.  I'll probably finish out my time in the tent as the weather is going to be steady over the next few days.  Aside from the whole quit-your-job-go-to-auctioneer-school-have-you-lost-your-mind deal, the big question surrounding this whole adventure is, "Why camp?"  Well, I chose to camp for a variety of reasons.  Lemme preach on it!

First, The Excellent Adventure would have been a much less blog worthy adventure if I was writing solely about auctioneer school.  I think interesting stories need a little pizzazz, but not to the point of sensationalism.  Camping for 11 nights added the final pinch of flavor to this dish.  Actually, if done properly, that could have made good blog fodder on its own.  Second, it saved me a truckload of money.  I paid $125 for my camping spot for the entire 11 night span. Hotels up here are running about $100 a night.  They aren't really that nice either.  I found a couple for $60 a night, but let's be real...... most of us would rather sleep in a tent than a $60 roach motel anyway, right?  I saved a grand.  Easy choice.  My main reason for choosing to camp was for the serenity.  After dark it's generally quiet.  Aside from a bobcat howl, a raccoon scavenging or the random plane slowing down as it approaches Hartsfield, it was quiet.  That has been nice.  It afforded me the opportunity to focus on the reason I came up here, auctioneer school.  Once the sun goes down at camp, there isn't much to do.  Check that.  There is nothing to do.  No bar.  No TV.  No one to hang out with and trade stories.  Instead of those usual things, I study each night.  I practice my number brackets and chant.  I do a lot of thinking and planning about Web sites, business structure, insurance, possible clients, employee needs, equipment and just how I am going to monetize this Excellent Adventure.  It was a good choice.  I put pen to paper (finger to keyboard) and I have a lot of ideas and notes to rock with once I get home.  A couple of other things came out the decision to camp too.  I have repeated the great mustache experiment of 2007.  I have had similar results.  Not quite ready to give it up, but I suspect that it isn't glorious and full enough to hang around.  I had also never worn a scarf before this week.  I will never wear a scarf outside of a cold campsite again, but it was a very nice tool to have around on those cold mornings.

So how about class today?  It was all policies and procedures this morning.  We talked about the rules of the Georgia Auctioneers Commission.  This info makes up 1/3 of the licensing test.  Very important material!  Don't violate these rules or you will find yourself without a license.  With no license, you make no money.  There are plenty of shady cats out there doing it under the radar, but I'm going to do it the right way.  What was it that Coach Russell said?  Do Right!  At chant practice we each sold some random items drawn out of a box.  Thanks to "Zeke" in our class for picking up those gems at the auction in Ceadertown the other night.  I was rolling.  5, 7 1/2, 10, 12 1/2, 15, 17 1/2......  Then they hit me with some hand signals.  Never seen those before!  Thought it might be some gang signs from Yammacraw Bluff or something.  I was totally caught off guard and it killed my momentum.  Valuable lesson.  I've got some learning to do there.  At the end if the day we had a math test.  If you know me personally, you know that isn't my thing.  I was a PR major instead of a Finance major for a reason.  Well, pigs flew and I made 100!  I was shocked.  I guess when there's money on the line, I can get the job done.  No algebraic computations necessary here.  I think I did so well because of the way the problems were written.  They were all worded to test your knowledge of the law.  Sales tax is calculated on top of a buyer's premium.  The buyer pays the commission, but not taxes.  All monies received from the auction must go into escrow, but buyer's premium or sales tax do not have to, etc.  I was prepared.

I'm going to go on one more field trip tonight, but this time solo.  Some of my classmates are going to an auction of another one of our classmates over in Glencoe, Alabama.  That's an hour and fifteen minutes from my campsite.  Since it was not a required part of the class, several of us opted not to go.  There is a public auction tonight in Rome though.  I'd be a dummy if I didn't ride over and check it out.  Never hurts to see how others run their show.

I hope everyone has a good night. Don't forget to set your clocks forward.  Looks like I'll be making campsite coffee in the dark for the next couple of mornings.