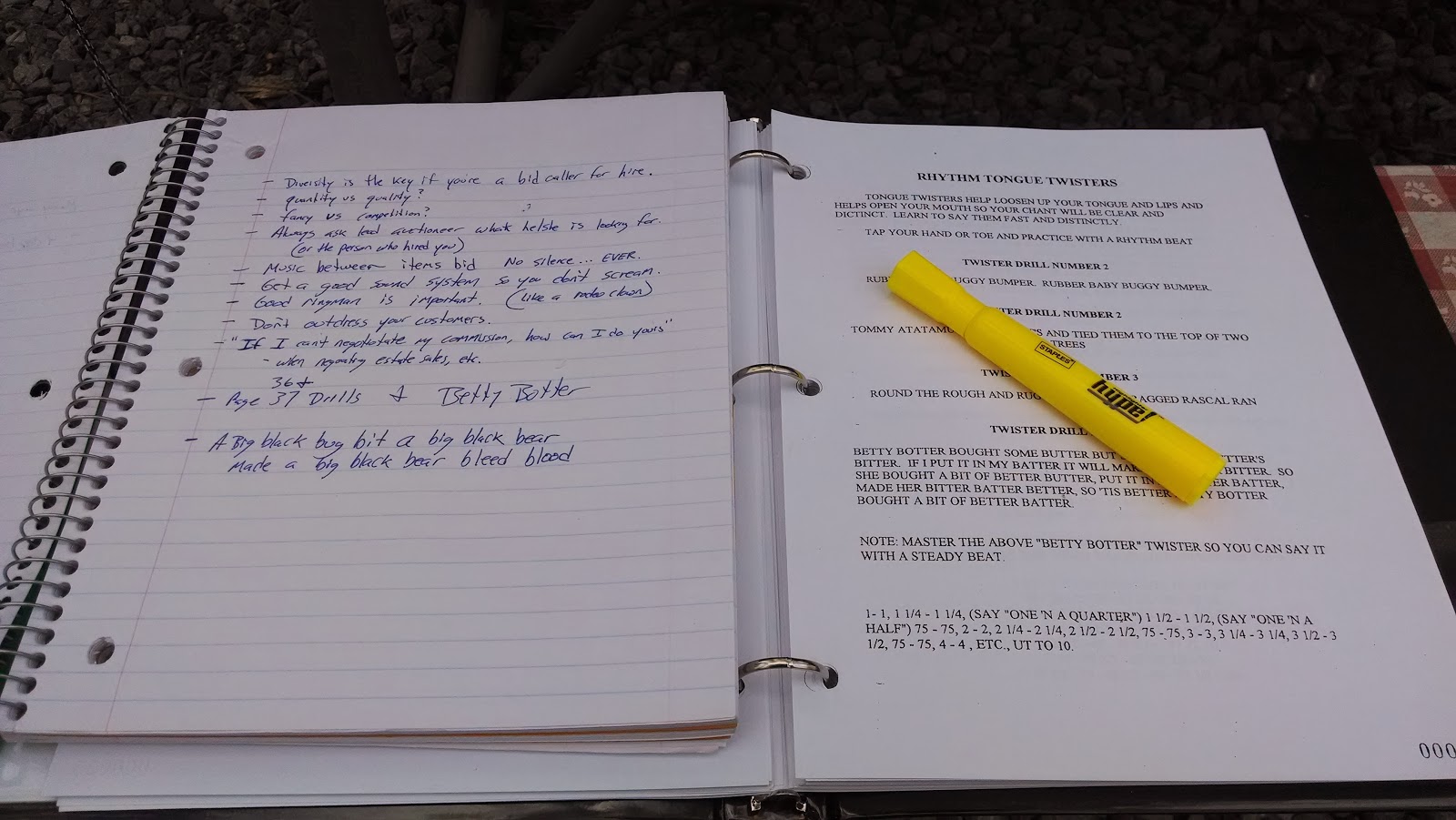 Information overload.  That's about the best way to describe my first day at auctioneer school.  We covered a LOT of information and we were in class all day with the exception of a couple of breaks and 30 minutes for lunch.  Though it was intimidating, it was awesome!

After a decent night's sleep, only interrupted by what I think was a prowling raccoon, I woke before daylight and fired up the camp stove for some oatmeal and coffee.  There is just something about coffee at a campsite that warms the soul in addition to the bones.  It tasted terrible, but delicious all at the same time.  My drive to the school is about 15 minutes, but of course I left out 45 minutes early because I'm a nervous nerd.

The building isn't what you'd expect.  It is in a strip mall, but not a new strip mall.  It's one of those 50 year old cinder block buildings along the road that generally sit in the dying part of town.  My school was no exception.  The building was old....very old.  Lucky for me I learned in college that the aesthetics of the building in which you sit does not necessarily correlate to the quality of education you receive.  (That's a shout out to all of me fellow Comm Arts alumni from Georgia Southern)  The gentleman leading the class is a 40+ year auction veteran.  Though I haven't heard his chant yet, I know that it is probably that of an old school cattle caller or tobacco auctioneer.  He was aided by a lady out of Atlanta who was once one of his star pupils.  The class is small, only ten folks.  To my surprise, one of the gentleman was from Claxton, GA, right up the road from me. We are both there for very different reasons, so there may be an opportunity for co-ops in the future.  The others were from various parts of GA, AL, TN and Mississippi.

The first day was a lot of overview.  We touched on a variety of different topics on which we will get more specific over the next nine days.  Just so everyone out there knows, there is a lot more to it than bid calling.  From clerking and law to advertising and collecting sales tax, the chant is actually a small portion of the overall course.  The vast majority of the school is devoted to ethics and good business practice.  I'm not sure if that is a cause or effect relationship in the auction business, but I am glad it's there.  Ever been to an auction and had the suspicion that you were bidding against someone who worked there?  Perhaps you were bidding against an imaginary person or even the overflowing trashcan?  A good auctioneer has to be trustworthy.  Good ethics make a great difference.  I think that goes for any business.  We actually did work on the chant a little bit today.  We will work on it daily.  That's a good thing!  While I like to talk, I have a loooooong way to go before I can rattle off numbers like the two cats teaching us.

Well, I'm off to get a shower , call the family and bed down for the night.  Day two of The Excellent Adventure has been a whirlwind.  I'll probably sleep good tonight.  Instead of counting sheep, I'm gonna to see how much I can get for them at auction.