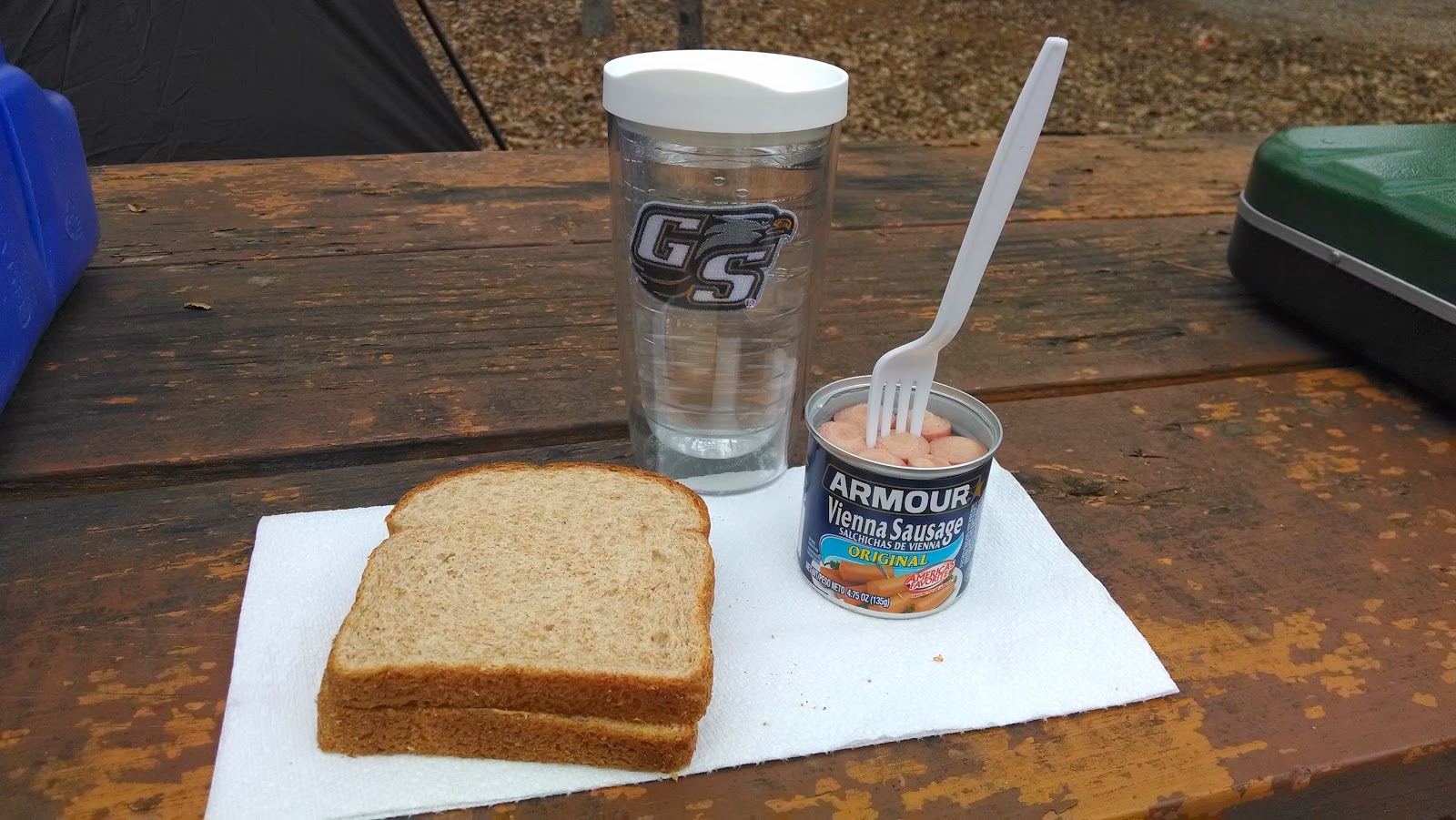 It's cold.  I'm not talking about cold.  I'm talking about COLD!  It's 34 at the moment and it looks like it will get down to about 27 overnight.  Not too bad under normal circumstances, but pretty bone chilling when you're camping.  It was wet when I got up this morning and a balmy 53.  The temperature has dropped throughout the day.  That's why I'm writing tonight from the laundry room instead of the tent!  I figured it would be a good opportunity to get a load of clothes done and stay warm at the same time.  Why am I doing this again?  Oh yeah.  It's an Excellent Adventure!  Bring it on!

I actually decided to sleep in the Jeep last night.  Based on the weather forecast I figured it would be raining when I woke up so I planned ahead.  It turned out just fine.  Back in the summer I did a linchpin modification to the rear seats of my Jeep.  That allowed the bottoms of the seats to be removed very easily. It also allowed another foot and a half of cargo space. That came in very handy last night. My head fit perfectly between the two front seats at the edge of the console, and my feet were just before touching the back hatch.  Overall it wasn't a bad night's sleep...... For sleeping in a car.  Looks like I'll do the same tonight in hopes for a little break from the wind.  Oh yeah....I didn't mention that did I?  It's coming out of the north at about 14 mph right now.  Brrrr.  It was actually already in the 30's when I was eating supper earlier tonight.  (Peanut butter sandwich and Vienna Sausages ...... In case you were wondering.)

Because of the rain, I left out of camp well before daylight this morning. I went in to Rome looking for some coffee as it was too wet to break out all of my equipment.  The fine folks at the Mapco Mart gas station had just what I needed.  Other than a tank of gas, that cup of coffee was the first thing that I have purchased since I got here.  Until lunch....we hit a place called Martha's Skillet.  It was some of the finest home cooking I've ever had.  Kind of like Lee's back in the Boro.  It might be a good breakfast spot later in the week if I encounter morning rain again.  I was early to school today.  No extra points, but it did get a chuckle from our teacher as he knew I was camping.

The morning lessons today were all devoted to law.  The afternoon was spent doing a clerking exercise.  The clerks at an auction earn their money!  They are indeed the ones who make sure the money is handled properly. Tomorrow we're taking a field trip to a wholesale auction in Villa Rica. It will be nice to see how a dealer auction works behind the scenes. I am very much looking forward to that.